Skip to content
Why do Chinese seem to copy so much and with so little regard for the works of the others?

Whether we like or not, China still is considered the world’s manufacturing center for counterfeit goods of any kind. Everything can be (and is) reproduced to the very last detail: mobile phones, DVDs, watches, jewelry, branded clothing and a long etcetera. This industry does not only works for the foreign markets, but locals also enjoy having access to the myriad of products this industry cheaply produces.

Despite Chinese efforts to become a creative power during this century and the continuous push of companies like ZTE or Huawei, the reality is that the copy is still a profitable and an efficient way to make cash. In a country of fast changes, there’s no better and cheaper way to keep the pace with the best and shorten economic and technological distances than copying the leaders.

But Ccopying in China is no longer limited to a physical product. It has spread to every kind of business, economic activity and services, such as duplicating entire stores… By the way, there’s no need to go to Shanghai to see one of these ‘famous’ duplicated stores: there are several near-perfect copies of Apple retail outlets in Zhuhai:

There are entire villages devoted exclusively to copy and reproduce paintings from the best, like the Dafen village, near Shenzhen. Expat Lingo has a great post about this city and how to move around, you should check it out! And it is not only cities copying, but copied cities, like an entire Austrian city, for example. Copying even reached food. Fake eggs, fake rice or fake ducks are on many tables by now. And I’m not talking about wax copies for display, but real food to be sold and consumed by people.

The examples could be endless because as said, everything is copied, no matter the size or the cost, so I’m going to bring in my personal experience on counterfeit goods and brands.

Or top luxury clothing brands like… Lare Boss, Peier Caillar or even the universally famous… Yanpeng Armani. Check out the signs from some of the shops, with a registered trademark symbol in some of them:

Please let me remark that all those shops were inside the hotel, around the main hall, and the clothes in there weren’t cheap at all! I wonder what would the “Occidental versions” of these brands think. The hotel didn’t have any problem having these blatant copycat shops on their premises, and after asking around, I confirmed that the hotel, in fact, owned the shops too, it wasn’t like a commercial mall where each shop is on their own.

So the question remains the same: why do Chinese copy so much and apparently with so little regard for the work and rights of the others?

First of all, in the Chinese culture, copying has never been neither illegal nor frowned upon or seen as a lack of talent. Never. In fact, the way to learn for a long time ago is the repetition, the exact reproduction of the master’s work and teachings.

In China, to copy something is to show respect to the author. This is because copying (or trying to replicate as close as possible) is still considered the best way to learn, an acceptable method of study, especially in art and crafts, where it’s easier to do so, but also in business, where knowing and reproducing the steps of the successful ones is something considered normal: if I can copy the best, it means I’m as good as him! becomes If I can do the handbags like Prada, it means I’m as good as Prada, and if I’m as good as Prada, I’m Prada. Philosophy to live by.

The best example of this culture is in the Chinese calligraphy. Traditionally, the study and practise of calligraphy was (and still is) based on copying masterpieces from reputed calligraphers, thus learning them by copying strictly, continuously, until the hand moves routinely and the copy becomes perfect. Any deviation or personal deviations from the model were seen as a failure of the student, and so that, dismissed. School’s educational system is the same: creativity is not really welcome, and the “copy and reproduce” scheme is the proper way to pass the tests, especially the Gaokao. So when you finish all your studies, it’s understandable that this kind of mentality keeps stuck in your head for the rest of your professional career. 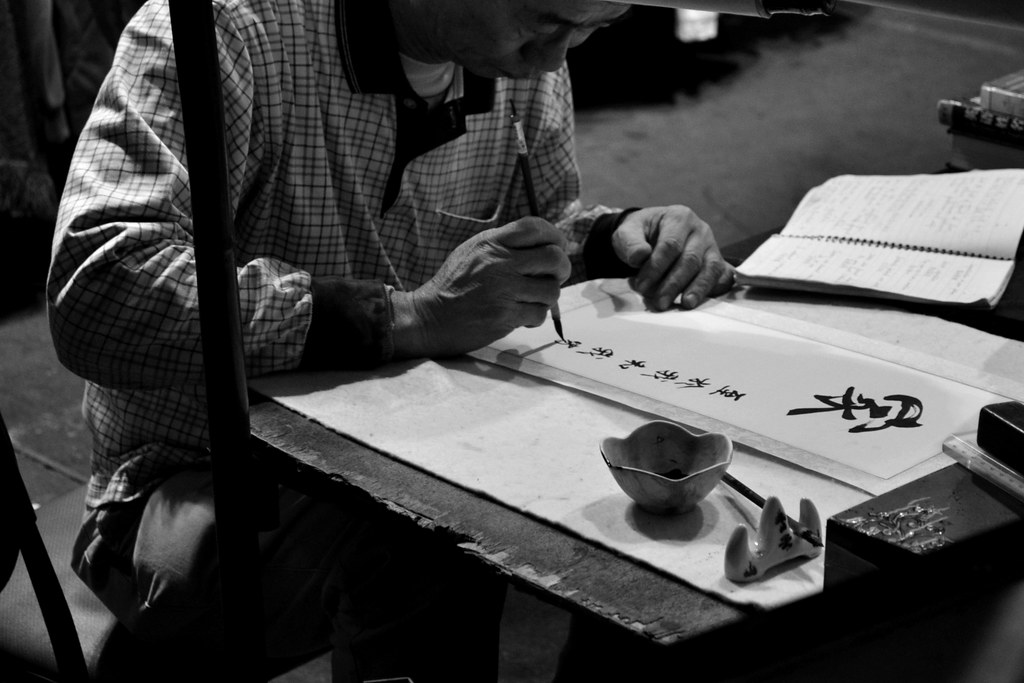 Don’t get me wrong: the ‘respect through copy‘ thing does not mean it somehow endorses what they do. This respect and method to learn translate to that the act of copying is not seen as stealing or taking advantage or as something as bad as in Western countries.

There are mundane reasons too! Easy money is the main one, of course. By copying successful brands with well-known and established products, Chinese companies skimp on R&D and materials costs, selling the product to a market which cannot really differentiate between a BlackBerry and a BlockBerry, as they look the same… thus cornering a big part of the (huge) Chinese market for themselves.

On the other side, it is fair to mention that authorities have increased their grip on counterfeit manufacturers, approved new and better laws protecting intellectual and industrial property rights, and also pushed for an effective enforcement of these laws.

As a closing, I would remark that if there is an industry devoted to producing counterfeit goods it is because there is a market that demands them, just like drugs. Chinese manufacturers are happy to produce whatever they are hired to do; sometimes inspecting supposed copycat manufacturers I realized most of the time factory managers had no idea they were counterfeiting anything, as they only knew they had a production order to meet, and competence is fierce in here, no business would say no to a deal.

In the end, there it would be no counterfeit or knock-offs being manufactured or laws infringed if there it was no westerners asking for it.