Skip to content
Cockfighting is a blood sport between two roosters, called gamecocks, in a ring called a cockpit. It is really popular all over Mexico, and in a city like Culiacán they mix up with high-end bets and over-staged manliness.

Cockfighting is a bloody fight between two roosters, called gamecocks, in a ring called a cockpit. It is really popular all over Mexico, and in a city like Culiacán, it ends mixed up with high-end bets and over-staged manliness. 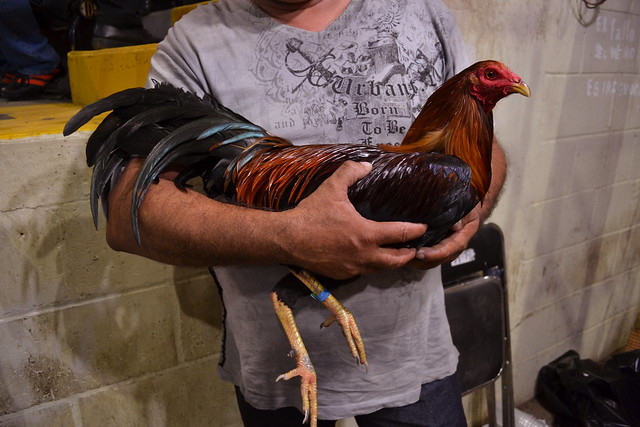 Cockfighting can be the only activity or be a part of a larger celebration, like a State Fair or similar. In any case, it is always a business where stacks of hundreds of pesos change hands fast, regional music plays hard and selling fighting roosters mix up, sprinkled with few buchones and drug lords strolling around showing off their bling.

The cockpit in Mexico is called Palenque, a sort of fairground very common throughout the country, with almost every major city having one. Sometimes these palenques combine cockfighting with concerts, where the singers or dancers do their shows after or before a cockfight. The bleachers are organized like in a Colosseum:

The cockpit itself or arena is a wooden ring, whose center is made of compacted dirt, with a frame of 4 meters each side, painted with lime, and lines connecting each side through the middle. Where the lines cross, there’s another frame, smaller (40cm), as seen below, where you place the gamecocks for each fight.

The roosters have three/four rounds, and they are placed first on the bigger frame, and at the third round, on the smaller one (like in the picture above), as usually they’re too wounded to approach each other from that far. 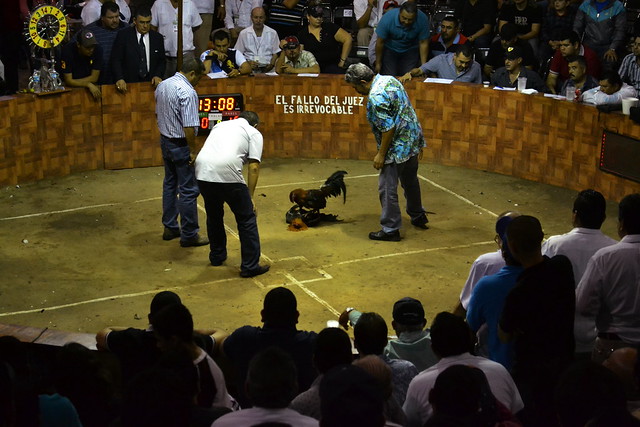 The gamecocks fight until one of them dies or is so critically injured that can’t stand still standing on the next round. The winner will be the last one standing, even if it drops dead seconds after, which happens often. At the end of each round, there is literally blood and guts spilled on the arena, but sometimes, as the day I went there, it was softcore and only some feathers were mangled. I suppose the damage was internal.

Among breeders who raise fighting cocks, there is great pride in the prowess of their birds and in winning a championship, as they will sell more fighting roosters and get a better reputation for the next fights (and bets, of course).