Skip to content
Always lurking around the stairs to the lower levels of Gongbei Underground, these professionals are a helping hand dodging border restrictions at Gongbei's Port. 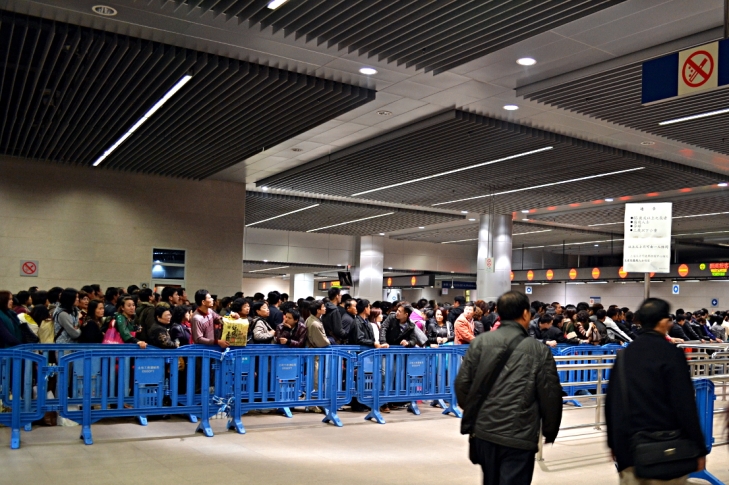 Amidst the large crowd gathered at the border crossing, there is a common element pops up from the rather heterogeneous mass: individuals with the same oversized plastic tartan bags… and a wad of patacas on their hands.

These people are border couriers, people running restricted goods between the territories of Macau and mainland China that remember: are part of the same country, but has two systems, thus the different laws, banknotes, police and a long list of differences that make them look like two completely different countries, which they are not… anyway, here is a plain version on this subject.

These people do not deal with illegal or forbidden items, but with those restricted. Like any other country, Chinese and Macanese authorities have legal caps on the quantities and types of products that a person can carry into their territories, let it be liquors, food, tobacco, electronics and other trinkets: this is when these people come into play, bringing the goods in excess for you to an agreed destination in Macau or to somebody waiting on the other side, even getting through customs with you, carrying the exceeding products with them so you don’t have to pay a fine and get the products requisitioned by the customs.

With their help, you can cross with the double or triple (depending on how many of them you hire) of the allowed limits of a product, in or out of China, including currency. Click on the pictures to see in detail the exchanges. Some still openly carry wads of cash:

Bear in mind that they do not operate in Hong Kong as (1) it is more expensive to go there from Zhuhai as there’s a ferry to catch, and (2) Hong Kong laws on mainland immigration are more restrictive than Macau’s: while the customer base of Macau’s casinos is mainly composed of Chinese nationals, with laws easing their transit, Hong Kong doesn’t really want or appreciate this kind of tourism, thus Gongbei Port of Entry is way busier than the border crossing located at Jiuzhou Port (meant for the ferries between Hong Kong and Zhuhai).

At the Port Authority building there are two border crossings with their respective inspection points: the Chinese and the Macanese (pictured in the first photo of this post), each one with its own regulations on allowed products, taxes and more.

From Macau/Hong Kong to China

There are no export duties in Macau or Hong Kong, so whatever you are carrying will be tax-free at the exit… until the Control Point at Gongbei Port, where the following applies:

From China to Macau

The Macanese border at Portas do Cerco has its own separate entry and exit regulations. There is no restriction on the importation of foreign currency, though. You know, the more you bring in, the more you will lose at the casinos 😉

Chinese Customs officials follow regulations strictly, so don’t try to play smart or pull a ‘white tourist’ tantrum… Exceeding the limits here mentioned means you will have to pay or have those products confiscated.

Apologies for the quality of some of the pictures: I had to take them from far away with a telephoto lens for obvious reasons.